Money as You Grow

Inflation is a term used to describe how prices rise over time. The rise in prices is in relation to the amount of money you have. The table below shows the rise in the price of bread over time: 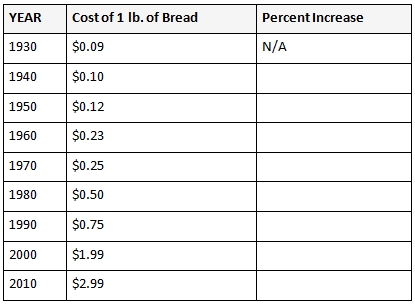 For the price in each decade, determine what the increase is as a percent of the price in the previous decade. Is the percent increase steady over time?

Under President Roosevelt, the Fair Labor Standards Act introduced the nation’s first minimum wage of $0.25 an hour in 1938. The table shows the rise in minimum wage over time:

Consumers are not affected by inflation when the amount of money they make increases proportionately with the increase in prices. Complete the last column of the table below to show what percentage of an hour’s pay a pound of bread costs: 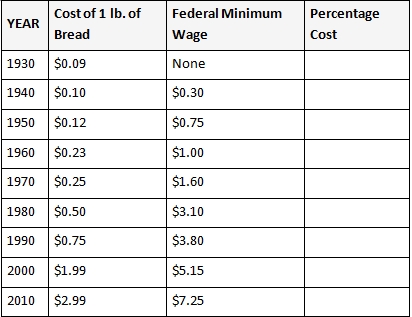 In which year were people who earn minimum wage most affected by inflation? Explain.

The purpose of this task is for students to calculate the percent increase and relative cost in a real-world context. Inflation, one of the big ideas in economics, is the rise in price of goods and services over time. This is considered in relation to the amount of money you have.

This task is part of a set collaboratively developed by Money as You Learn, an initiative inspired by recommendations of the President’s Advisory Council on Financial Capability, and Illustrative Mathematics. Integrating essential financial literacy concepts into the teaching of the Common Core State Standards can strengthen teaching of the Common Core and expose students to knowledge and skills they need to become financially capable young adults. A mapping of essential personal finance concepts and skills against the Common Core State Standards as well as additional tasks and texts will be available at www.moneyasyoulearn.org. This task and additional personal finance-related mathematics tasks are available at www.illustrativemathematics.org and are tagged “financial literacy.” 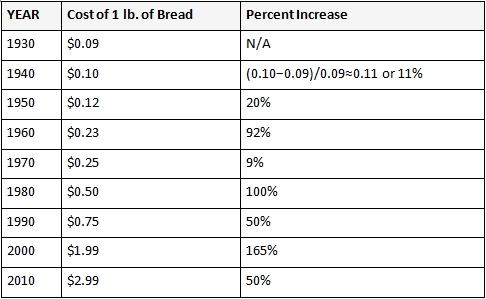 The price of bread increases each decade. However, some decades see a much larger percent increase than others. 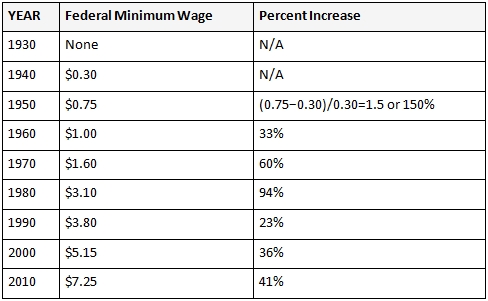 The federal minimum wage increased each decade. However, some decades see a much larger percent increase than others. 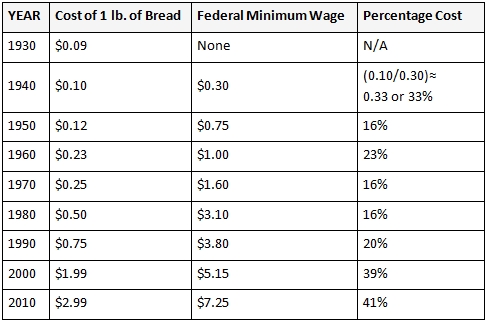